Now, I know most of you guys hate Trolls... So the potential Arizona law sounds rather pleasing. In the bill it states that criminal penalties can be issued to people "using any electronic or digital device, instead of the telephone, with the intent to terrify, intimidate, threaten, harass, annoy or offend a person."

Now, let's all face it, we all have been mean on the internet at one time or another. Some of us (Not pointing fingers) have done it more than often. Now under this bill, everyone who has used the internet would receive some penalty or the other. It's clear that these people have never used the internet to begin with. (Similar, If you watched the SOPA debates, they were hilarious)

Now, let's say some other ridiculous bill was about to get passed. And you commented on some article that the lawmaker was "Really, really, stupid." See, now you've gone out with the intent to offend therefore you will now be facing some sort of punishment regarding that comment.

This is why I think any law that gets you in trouble for saying or posting something is no good. It's all a slippery slope. This one especially. I mean seriously! The language is so broad! If you made a typo, you could have annoyed someone for all we know!

This law will probably use Cyber-Bullying as an excuse, but cyber-bullying must be dealt with in another fashion. I know this sounds really lame, I don't know how to deal with cyber-bullying, but this clearly isn't the way.

I made this argument for SOPA but I feel it pertains here too. Censoring is a slippery slope, no matter what. If you can take a law, and summarize it to "If you say something along the lines of ______ you will get in trouble." Then the law is a sucky law. 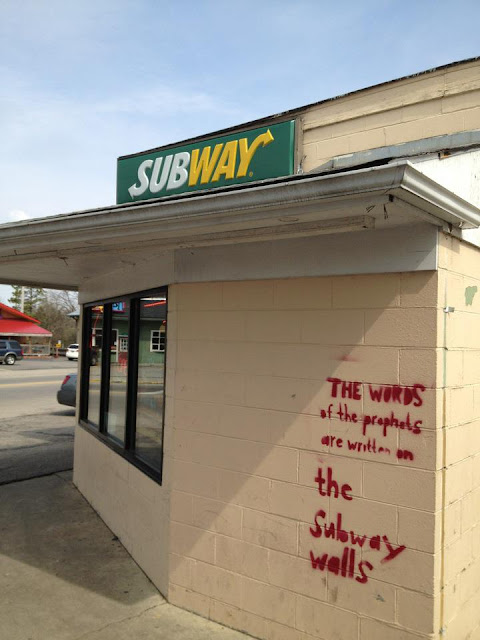 Posted by Kevin Peters at 5:59 PM No comments:

Likeliness of Causing An Apocalypse: Hard To Tell (What is it?)/ Likely.

Two sounds were identified 115 Degrees West in the Pacific Ocean in 1997. One called "The Bloop," and another one called "The Slowdown."

Man-Made things such as bombs and submarines were ruled out for "The Bloop." And also things like underwater earthquakes. Whatever made the sound was biological and several times larger than a blue whale.

Coincidentally, this is the same place where Cthulhu is supposed to reside. Cthulhu cults think that this is Cthulhu... 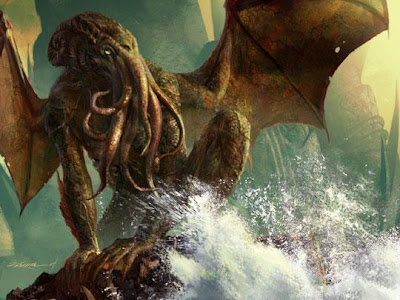 Likeliness of Causing an Apocalypse: Hard to tell.

My friends last night introduced me to this character who was on Yahoo news. My friends also say this man is awesome.

My friends, and this man, are scary people.

Here's a quick summary of the article:

In the mountains of Utah, Salt Lake City to be exact, lurks a man who scavenges off of the food that are left in cabins. No one knows the identity of the man. And they only have one photo that was taken by a motion detecting camera. He's roamed across 1,000 square miles in snow that can get 10 feet deep. They're countless stories of families going Skiing then coming back to their house to find...well...

One guy found his guns taking out of their safe and laid out on the table, none of them had been taken.

Another guy found the grips to all of his guns missing. No whole gun was gone, just the grips taken off. Pretty weird. If you don't think that's bad, it get's worse from there.

Another family found most of their food and hunting gear taken and a note that read: "Get off my mountain." This guy has to have a sense of humor for spoofing an old man.


Then the worst thing happened. A family came home to find most of their stuff taken, all their photos of Jesus defaced, AND... he had defecated in a pan and left. Ewww... Even though his prints haven't come up with anything, couldn't they do some CSI stuff with his poo?


From my speculation, it seems like he building something out of gun parts (Explaining the laying out guns on the table and taking only the grips.)


What caught my attention is that he also seems to be preparing for some kind of Apocalypse. Police have found radios, weapons, dehydrated food, and camping gear in left behind camps thought to be owned by him. They found 19 guns in one camp. This guy also had a copy of Into the Wild.


And now the moment you've all been waiting for... His one and only picture that kinda reminds me of the famous Bigfoot Picture in 1967.

Now, I know mah blog isn't at all popular yet.

Still, I was wondering if I could start a series where I ask "you guys" how you would survive certain scenarios that happen in a post-apocalyptic or near post-apocalyptic setting. What I think is the best answer will be featured in the next post. Leave suggestions about what I scenarios I should ask. Then I can be lazy, yay.

Scenario: You hear about a rapidly spreading lethal flu, it hasn't struck you area, but you're sure it will soon. What's your course of action? Keep in mind the other dangers that come along with human nature when there is anarchy such as riots, looting, murder, stealing, so on and so on.

Posted by Kevin Peters at 4:15 PM No comments:

This one is fairly self-explanatory. Someone engineered a Bird Flu that is highly transmittable to Humans. The guys want to publish their findings and method of making it while everyone else wants to keep it under wraps. Now, the obvious concern is Bioterrorism. But the scientist argument is that if we release their method of making it then someone can come up with a cure and vaccine for it, and we can forget it knowing that if there is an outbreak we're prepared. That, and Free Speech. So it is somewhat possible that all you humans will die standing up for something you believe in so strongly. And I would have to agree with your petty minds, censoring is a slippery slope.

Conclusion: There wouldn't even be the fun of a Zombie Apocalypse. Just everyone coughing on each other.

P.S. I'm going to drop this in real quick. Contagion. That is all.
Posted by Kevin Peters at 5:33 PM No comments:

Censoring of the internet is pretty bad but not bad enough for an apocalypse. Many countries around the world still censor their internet and no nuclear war or epidemic has happened yet. Sure, censoring the internet for ANY reason is a slippery slope. If the government says they're just going to take down extremist or websites of terrorists, eventually that will expand to just taking down stuff that disagrees with them. So don't except censoring of your internet at all. But if it does happen, you're still pretty safe, although you Facebook account might not. And they might arrest you for posting "The government is silly." But the rest of the world is still pretty okay.